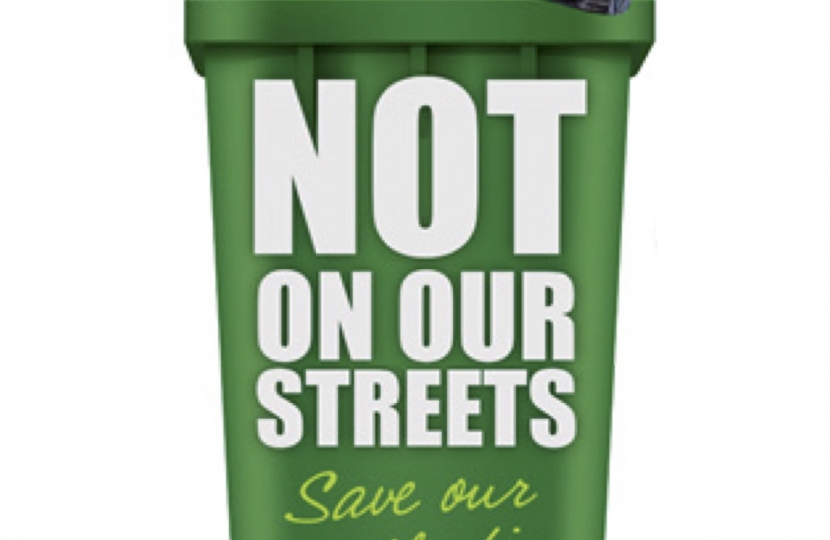 Merton's Labour council are planning to scrap the weekly bin collection.  Over 3500 people replied to our survey, with 95% against Labour's plans.  Many of you asked for more detail, so here is an FAQ which we prepared to help you understand more about Labour's plans, and also a poster for your window to show Merton Council your support for keeping the weekly bin collection.

Why is the Labour administration changing the waste collection service in Merton?

However, the costs of implementing this new system are already spiralling and serious doubt has also been cast on whether the changes will lead to any improvements in street cleanliness. For example, the founder of local anti-litter campaign group, Merton Matters, has said:

“For a borough that’s already struggling with waste, having fewer collections is just madness. There’s a fundamental issue with cleanliness in Merton.”

In reality, these changes are being made because they suit the needs of the contractor chosen to deliver waste services across all four boroughs which form the South London Waste Partnership (Kingston, Sutton and Croydon and Merton). Rather than looking at what service may be most appropriate for Merton residents and council taxpayers, the council is being dictated to by the contractor.

Ever since these plans first came to light, Conservative councillors have been campaigning for the Council to reconsider its plans, look at alternatives to protect the weekly bin collection and reduce the excessive number of new wheelie bins.

We recognise that street cleaning is a big issue for residents and that’s why in the past we have called for the provision of lids for Merton’s recycling boxes as a more cost effective way of protecting paper and cardboard from the elements. We have also campaigned hard for the council to reinstate street sweeping straight after the rubbish collection.

Merton Labour has consistently refused to look at other options however.

What will be the impact of these changes on recycling rates?

The new system is considerably more complex than before as not only will households need up to five separate containers but the council is ending ‘co-mingling’ (whereby all recycling i.e. paper, card, plastics, glass and cans are put into one single receptacle).  The fear is that a considerable number of residents will be put off recycling by the new system and instead put everything in one bin.

Merton’s recycling rates have already flat lined in recent years under Labour. Yet worryingly, one of the findings of the 2015 pilot undertaken in Lavender Fields ward was a rise in the amount of residual waste being collected during the trial period. So instead of reducing the amount of waste sent to landfill, Labour’s new system risks increasing it and recycling rates are likely to fall further.

What if I live in a street with only small front gardens or frontages and therefore limited space to house multiple wheelie bins?

This is a real problem. As well as the inconvenience of putting household rubbish in five different containers, many residents will inevitably have these bins clogging up front gardens, pavements and kitchens. It will mean a massive increase in ugly bins blighting our streets.

Merton Council says it recognises that the approach to waste collection cannot necessarily be a “one size fits all” approach and that “different container types and sizes will need to be appropriate for the property type”.

However, the Council has also stated that “in order for collection processes to be as lean and efficient as possible standardisation will be required and any variation from the standard process would require justifiable reasons”. Despite Conservative councillors asking what would constitute “justifiable reasons”, no further detail has yet been forthcoming.  At the September Council meeting, the Labour administration refused to provide details on exactly what choices and flexibility will be available to residents given the Council’s stated commitment not to impose a “one size fits all” service.

How are older and disabled residents supposed to cope with the new system?

Conservative councillors have consistently raised this concern. There seems to have been no consideration of the impact on elderly and disabled residents of these changes. For example, no Equality Impact Assessment was published alongside the Cabinet report to enable Labour councillors to consider this as part of the decision making process.

The council does currently provide an assisted collection service but there has been no clarification as to how this system will cope with the inevitable increase in demand if these changes go ahead as many more residents are likely to be unable to manoeuvre the large wheelie bins.

There is also understandable concern about these changes proving a hazard to pedestrians as all the additional bins will inevitably clutter up the pavements on collection day. This risks leading to more accident and injury insurance claims against the council and additional costs for council taxpayers.

What consultation has the Council undertaken with residents about these changes?

These are clearly radical changes to the waste collection service and ones that will affect almost all residents across the borough. Yet remarkably there has been no consultation.

A small pilot was conducted in 2015 involving just 1200 households in Lavender Fields, Mitcham (out of a total of 75,000 households in the whole of Merton). It was not therefore representative of the different types of housing stock found in the borough. Moreover, the pilot used a weekly – rather than fortnightly – rubbish collection during the trial period and recyclables were collected together rather than being separated out into paper and card and then plastic, glass and cans as is now proposed.

There is also no evidence that residents support these changes. Indeed, the Conservative survey completed by over 3,000 residents showed that 95% of people are opposed to the plans. Nor were these changes mentioned anywhere in Merton Labour’s manifesto for the 2014 local elections. In fact, Labour pledged to protect the weekly rubbish collection, with one of their 5 ‘promises for the next 4 years’ including:

“We will collect your rubbish each week and fight off the pressure to move to fortnightly or monthly collections”.

How much is it costing to change this system?

Conservative councillors have consistently challenged Merton Council on the finances of this new scheme, and in particular the cost of introducing multiple wheelie bins across the borough. Even though the council has now signed a lengthy contract, it is clear that many details have still not been finalised and the business case is riddled with untested assumptions.

Even more worryingly the cost of these changes is rocketing month on month. Since September 2016 the cost of purchasing the thousands of new wheelie bins that will be required has gone up by £1.2 million – a massive 75% increase. The council is already committed to spending £6.75million on bins and vehicles for the new waste collection system. Now the latest budget papers suggest an extra £800,000 needs to be ploughed into waste services next year.

Labour councillors are shelling out millions of pounds of council taxpayers’ money to scrap the weekly bin collection that they vowed to protect just three years ago. It doesn’t make any sense.

Conservatives believe that the council needs to invest in waste services but only if there is a clear strategy and business case that balances the needs for efficiency with resident satisfaction, an improved service and increases in recycling.

Will Merton Council therefore be reducing our council tax?

In short, no. The Labour administration has not indicated any intention to reduce council tax to compensate residents for considerably reducing the level of service they receive.

Will the Council consider weekly collections in the summer months to avoid potential risks to public health from foul smells and insects?

Conservative councillors have raised this with the Council but we were told there are currently no plans to increase the level of frequency during the summer months.

They did acknowledge however that larger or additional bins may need to be provided for larger families of 6 or more people or for families with two or more small children in nappies.

Like many residents, we are concerned about the public health risks of Labour’s policy. We have repeatedly asked for a professional and independent assessment to be undertaken by Merton’s Director of Public Health on the impact of the council’s proposal to end the weekly rubbish collection. However, the Labour administration has refused stating simply that “the changes that are happening in the borough are not unusual” and citing other parts of the country where this system is already in operation.

How do these changes compare with what happens elsewhere?

Interestingly Epsom and Ewell council just up the road is currently in the process of reinstating weekly refuse collections from spring 2017. This is because they have listened to what residents tell them they want. See link below to the new weekly service:

With regard to wheelie bins, other areas nearby such as Elmbridge do use these but they manage very well with just 2 wheelie bins: one for household waste and one for all recycling. This is a more straightforward system for residents since all the recycling is ‘co-mingled’ and then sorted after collection.

Three other neighbouring boroughs (Kingston, Sutton and Croydon) are all members of the South London Waste Partnership and so part of the same new contract as Merton. This means that by October 2018 they will all be operating the same system i.e. fortnightly rubbish collections and up to five separate containers (including two massive wheelie bins) for rubbish and recycling.

What about if I live in a block of flats?

The collection of all waste and recycling from communal residential properties in Merton will be on an output basis where the bins will be emptied before they become full on a minimum weekly basis. The frequency of communal bins will be tailored per site following an initial monitoring period and survey of containers at communal properties to ensure there is appropriate provision of waste, food and recycling bins. This will be a change from the fixed scheduled collection.

Prior to rolling out the new waste collection service, we understand that residents in flats will be advised of the changes.

What if I don’t want multiple wheelie bins? Will I be forced to have them?

Although the council claims not to be imposing a “one size fits all” waste collection service, it is still not at all clear in what circumstances residents would not have to adhere to the standard system involving multiple wheelie bins.

As above, the problem here is that it is the contractor dictating the system to the council rather than the council obliging the contractor to deliver the most convenient service for residents and one which best meets their needs.

What we do know is that the council will be willing to fine any residents who do not use the new system. In response to questions on this from Conservative councillors, the council cited its powers under Section 46 of the Environmental Protection Act 1990, whereby a waste collection authority can serve a legal notice on a household that does not comply with the system of waste collection provided. Councils have the power to determine the type of containers to be used to collect household waste. Merton officers have confirmed that if a household does not comply with the waste collection service provided then they will be issued with a Section 46 notice.

Enforcement notices will be issued by council officers and any cost / revenue would be wholly retained by Merton council. This means that, as well as costing council taxpayers millions of pounds to switch to this new system, residents who refuse to change or mistakenly present their waste and recycling incorrectly risk having to pay again through fines that will go into the council’s coffers.

Please support our Campaign, by downloading the attached poster below and putting up on your window.

Despite opposition from local residents, the Labour Council are determined to reduce your bin collections and enforce the use of large, expensive wheelie bins.