Cllr Oonagh Moulton has lived with her family in Wimbledon Park for over 20 years, having the privilege of representing residents as Councillor since 2002. She became Leader of the Merton Conservative Group in 2013 and served as Leader for 6 years.

Oonagh champions all the local facilities her ward has to offer and gets great satisfaction from helping residents with issues ranging from parking, refuse and recycling, to planning and enforcement. She enjoys leading campaigns with local residents for example to stop mobile phone masts being placed close to schools or on residential streets, securing a new paddling pool for Wimbledon Park, or ensuring the ward remains clean and graffiti-free. Other successful campaigns have included ensuring the reinstatement of the puffin crossing on Haydon's Road, securing more district line trains on the Wimbledon branch and reinstatement of the 20 minutes free parking for our local shopping parades. Recent successes have seen the installation of the new crossing for Leopold Road and after many years campaigning step-free access has been agreed by TFL for Wimbledon Park Station.

During two years in the Cabinet (May 2006-8) Oonagh spearheaded a successful drive to raise standards in Merton's schools and ensure better youth and sport provision across the Borough. She is delighted that all secondary schools now have sixth forms (since September 2010) and has continued to press for a new school to be built in Wimbledon.

Oonagh has served on many of the Council's Overview and Scrutiny panels and committees. She was a longstanding member of the Life Chances now Children & Young People’s O&S Panel for many years and has also chaired the Corporate Capacity Panel. Now a member of the Overview & Scrutiny Commission, she relishes holding the Cabinet to account. She has also served on the General Purposes Committee, the Licensing Committee and the Standards Committee.

In May 2010 Oonagh's extensive service and community leadership qualities were recognised when she was elected Mayor of the Borough for 2010-11. She was delighted to work with the people of Merton making young people the focus of the year and with a particular emphasis on music, sport and the performing arts. Her chosen charities were Wimbledon Civic Theatre Trust and Macmillan Cancer Support, for which over £41,000 was raised during her year and went directly to fund specific projects in the Borough.

Oonagh was appointed to LFEPA (the London Fire and Emergency Planning Authority) in May 2005. She has been a school governor of local schools for many years. She was a Governor of Bishop Gilpin C of E Primary School for 10 years and has also served as a Governor of Ricards Lodge High School. She is now a Governor at Wimbledon Park Primary School and as a former trustee she is now on the Advisory Council of the Polka Theatre.

To unwind she enjoys supporting local theatre, sport and music events, Nordic Walking & aqua classes, reading with a local book club and relaxing with her husband and three boys. 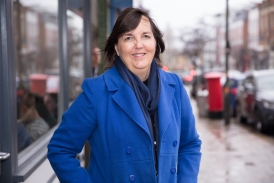