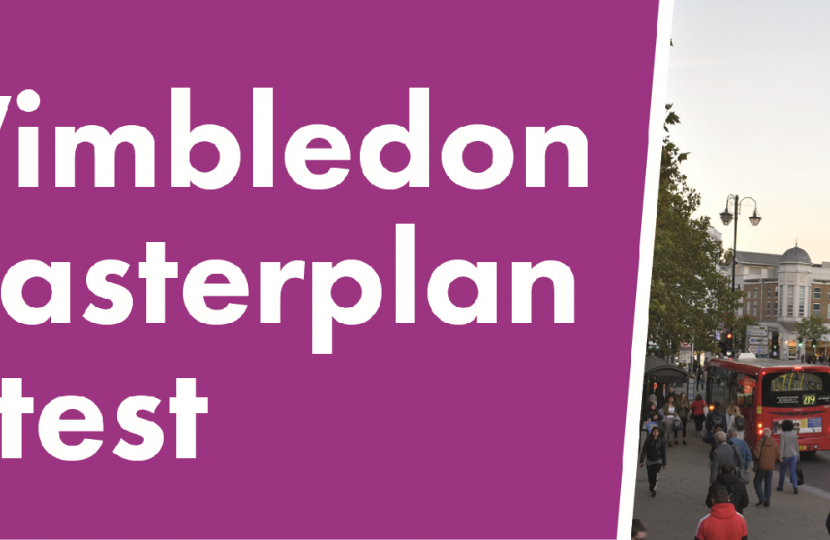 Below is the view of Merton Conservatives on the Wimbledon Town plan, but we always want to hear your views so please click on this link and tell us what is important to you on this issue.

Merton Conservatives support a vision for Wimbledon that is built at a lower height and a lower density than has been proposed in the Future Wimbledon Masterplan. We feel that the vision for Wimbledon must be ambitious with a focus on quality. Wimbledon is currently home to a working population of many thousands, and the location of many international headquarters, so we feel that the quality of design and material is paramount to any redevelopment.

In many other redevelopments such as Birmingham New Street Station, Reading Station or St Pancras Station a redesigned station has facilitated a vast increase in the retail and employment offering, and whilst this should be the aim for Wimbledon, we would like to see development proposals come forward that preserve the history of the town, enhance it in a natural way without being overbearing and ensure this Masterplan looks at Wimbledon as a “whole” taking into consideration effects from other developments such as Plough Lane.

The Masterplan offers a new chance to create exciting architecture features such as lane ways between the main streets which can attract local small businesses, as well as nationally known stores. The opportunity to create a central square is something that we would be keen to see achieved, and believe that it would help to give a focal point to Wimbledon. We also support the construction of a concert hall which in addition to improving Wimbledon’s cultural offering would be able to host conferences and other large events bringing additional revenue into the town.

Whilst we accept that development will be at a greater height than at present, we feel the current draft Masterplan is failing to listen to the concerns of local residents, is inconsistent with the Mayor of London’s draft London Plan and does not provide answers to the Infrastructure required for the expansion. We especially oppose the suggestion that the current YMCA site can be redeveloped at a greater height, this is against the wishes of residents who do not want construction on this scale at this end of The Broadway.

We feel that this will be detrimental unless it is done in an architecturally sensitive fashion, that takes account of residents and the much loved local buildings and character of Wimbledon. This is a great opportunity for Wimbledon to provide a greater range of employment opportunities, as well as increasing the number of shops and restaurants for local residents.

A key focus for the Conservative Group is the air quality of Wimbledon; as such we would like to see a vision that places the need to green Wimbledon at its heart. The aim of the Masterplan in this respect is welcome; whilst the type of planting is beyond the scope of this plan we would like the council to aim to use trees and plants that absorb the highest amount of CO2 and other dangerous emissions.

Whilst we realise that the transport aspect is also beyond the scope of this plan, however, it is vitally important that any measures that reduce traffic and congestion in central Wimbledon do not simply push this traffic into surrounding roads. It is also vital that impacts due to the Masterplan are fully considered with workable solutions provided.

The Future of Wimbledon Town Centre- Have your say