Our plan to save Wimbledon Police Station - FACT CHECK 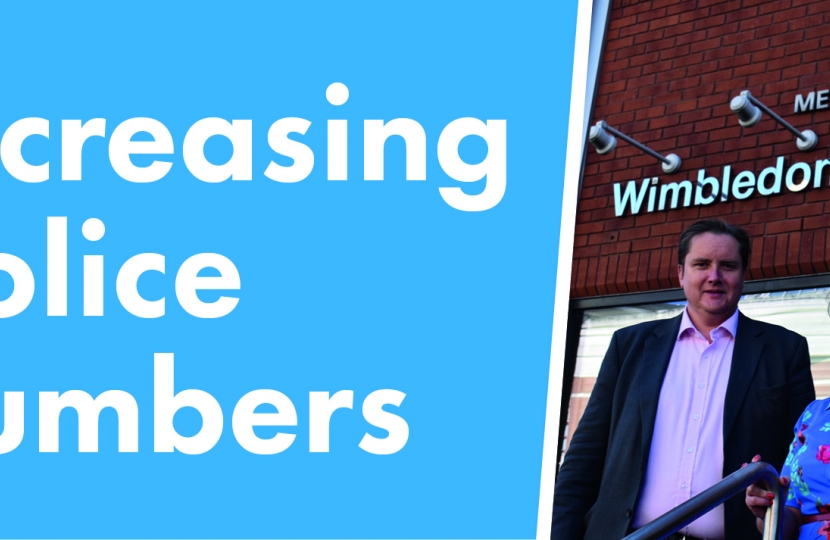 In the summer of 2017 the Mayor of London, Sadiq Khan, announced plans to close Wimbledon Police Station (alongside a host of others across London). Since that announcement, in conjunction with local residents, Merton Conservatives and Stephen Hammond MP have been working hard to keep the police station open.

The Mayor’s consultation was named the worst consultation of 2017 by the independent Consultation Institute, undermining any confidence that the public might have in the decisions made as a result. This note explains, in more detail, what has been done so far and our plans for what we will do if we win control of Merton Council at the local elections on 3 May 2018.

As well as being a major transport hub, Wimbledon town centre has the busiest night time economy of anywhere in Merton. Alongside the benefits of Wimbledon being a lively and exciting place to live and socialise, there are some draw backs. One of these is crime. A large proportion of all the crime recorded in Merton is carried out within 200 metres of the Broadway in Wimbledon town centre.

It is therefore illogical to close the police station when it is already ideally located. It provides a 24/7 base for police officers and emergency response vehicles, allowing them to more easily get to those areas which need their services most frequently. Moving these further away from this area makes no sense.

In an immediate response to the launch of the Mayor’s consultation, Merton Conservatives held street stalls in Wimbledon town centre and also gathered online support for our campaign to keep the police station open. By the time the consultation closed in October, we had gathered almost 5,000 names supporting our campaign which we presented to the Mayor.

Stephen Hammond MP made numerous requests for a meeting with the Mayor throughout the consultation period, and immediately after its closure, to highlight why we believed it was the wrong decision. Sadly, the Mayor did not respond. In November, the Mayor announced that he intended to proceed with his plans to close the police station, despite the flaws in his consultation and despite failing to engage with residents or elected representatives.

Making the case in Council

Given the strength of feeling within the local community, Conservative councillors have tabled three separate motions at Full Council opposing the closure of Wimbledon police station and pressing the Mayor of London to reconsider his ill-judged proposal. We have also probed the Borough Commander in detail on the issue at public scrutiny meetings.

A new plan from the Conservatives

We recognise that all public services have had to operate with tighter financial resources whilst the government restored and repaired the economy. However, this does not excuse poor decisions being made which use money as an excuse.

Merton Conservatives have therefore come up with a fully-costed plan, that has been approved as permissible by senior council officers (including the chief financial officer), to keep Wimbledon Police Station open if we win control of Merton Council on 3 May. This is our commitment:

For 2018, we have assumed that, if we win the Merton Council election, the new arrangements will not take effect until October. This means that there will only be a 6-month impact on the 2018/19 finances.

This is the detail of our fully-costed plan. It’s complicated, so apologies if not intuitive to follow.

These figures come from the Director of Corporate Services. The £108k will be taken from the £1.5 million contingency fund which has an ongoing revenue implication that is already built in to the council’s Medium Term Financial Strategy (MTFS).

This would balance the budget in 2018/19 and then we have clear plans to increase revenue from new sources in future years if we are elected to run Merton Council in May, including taking a more commercial approach to how the Council manages its significant assets.

It is worth noting that as it is the purchase of a site of commercial value, the bulk of the costs (£7.411m including stamp duty) will be taken from the available balance of the Acquisitions Budget in the Capital Programme and the rest by additional borrowing, which is well within the tolerances seen in the annual capital programme outcome (usually hugely underspent).

Can we really implement this plan?

Yes, but only if we win a majority in the elections to Merton Council on 3 May 2018.

Conservative-controlled Hillingdon Council has already opened negotiations with MOPAC to keep their station open and, whilst these are still ongoing, there is no indication that they will not result in a successful outcome.

We anticipate that other Conservative-controlled councils will also follow suit.We put forward our plan to a meeting of all councillors on 7 February and again on 28 February. Sadly, the Labour, Independent and single Lib Dem councillor all voted against our plan. This is why we need change on Merton Council at the forthcoming election.

What about the Liberal Democrat proposal?

The Lib Dems in Merton have launched a campaign to get the Mayor to re-run his original consultation. Our concern is that the best outcome from their legal action is that the consultation is overturned and the Mayor has to run a new consultation which, ultimately, doesn’t actually change the outcome and that Wimbledon Police Station is still closed.

The Mayor should certainly not rely on the outcome of his first flawed exercise. Nevertheless, we haven't detected a willingness to listen from the Mayor. In all likelihood any new consultation, whilst certainly delaying the closure, would not result in a different result at the end of the process.

What about the Labour proposal?

They don’t have one and are seemingly happy to let our police station close.

Why should you support for the Conservative proposal?

We believe that our proposal will be attractive to the Mayor - it provides an opportunity to realise value on the site for the Mayor, provides the Council with an investment in the town centre as well as an ongoing income from it, whilst also reducing the running costs for the police. It is a more positive and concrete solution that can provide certainty around the future of the police station in a shorter time frame than a legal challenge. In addition it respects the views of the thousands of residents who have opposed the closure of our police station. Win win!

It’s time to take action to save our police station from closure, and it’s time for a change. Vote for Merton Conservatives on 3 May and we will immediately open negotiations with the Mayor and ensure that our police station, and those officers based within it, are able to maintain their reassuring presence in our community.

Campaigning to Save Wimbledon Police Station